President Bush’s contempt for our laws, our constitution and the lives of our citizen soldiers in Iraq, continues--- unabated by public opinion, court decisions, congressional democrats and most of all the Republican Party. Commuting the sentence of convicted perjurer and obstructer of justice, "Scooter" Libby, is merely another star in the Bush crown of hubris.

Those who cry there was no "core crime" (to justify Libby being tried) are just shoveling baloney over the putrid corpse of a cover-up in hopes of mitigating the stench emanating from the White House.

It was precisely because of Libby"s lies and obstruction( "I don’t remember" talking to Vice President Cheney) that kept the special prosecutor from following the trail that was clearly headed directly through the White House door. Moreover, the "core" of the White House Valerie Plame strategy was to prevent further exposure of the White House lies and deceptions leading up to the invasion of Iraq.

Bush has had his thumb at his nose and fingers waggling at our laws and justice every since he unpacked at the White House. His "signing attachments" to legislation passed by Congress says it all: "This law doesn’t apply to me unless I choose for it do so!"
Posted by bill sanders at 5:20 PM

bill sanders
Ft. Myers, Florida, United States
Bill Sanders is a graduate of Pompano Beach High School and Western Kentucky University, where he set an NCAA passing record as quarterback of the football team and earned a BA in English. Served in U.S. Army in Korea. Newspaper experience: Pacific Stars and Stripes (Tokyo), Greensboro Daily News (N.C.), The Kansas City Star and The Milwaukee Journal. Cartoons syndicated to over 100 newspapers.Has been listed in Who's Who In America, Who's Who In American Graphic Arts,and is in the Wisconsin Media Hall of Fame. He has been featured in Newsweek Magazine and on CBS,NBC, National Public Television and Radio and BBC of London. 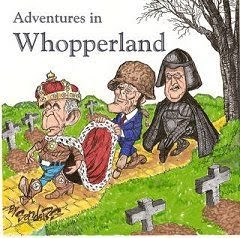 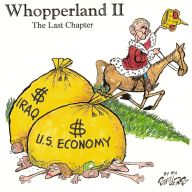 Dubya rides into the sunset!